The fairytale world of the Brothers Grimm – Museeum

Cinderella, Rapunzel, Rumpelstiltskin, Hansel and Gretel, Snow White and Sleeping Beauty are some of the most well-known folk tales recorded and published by brothers Jacob and Wilhelm Grimm. In their resident town of Kassel, Germany, there is a museum that celebrates their lives, stories, legacy and most importantly their academic work.

A brand new museum, Grimmwelt (Grimm World in English) opened its doors to the public in late 2015. Since then, the museum has left quite an impact on its visitors. Grimmwelt not only presents the fairy tales told by the famous story-tellers, but also their most essential work: the creation of the German Dictionary.

Jacob Grimm was born in 1785 and Wilhelm in 1786 in the town of Hanau. The two were raised in a poor family and had to prove their worth first in school and later in the university. The Brothers Grimm became an important element of medieval German literature because of their habit of collecting folk tales, even though cursory, and publishing them. This literary project made them well-respected in academic circles. After their involvement in political protests, the brothers were dismissed from their university posts. During that time, they began working on their German dictionary. In 1840, the brothers were offered posts at the University of Berlin where they continued their research. In later years, Jacob resigned to pursue a short-lived career in politics, but Wilhelm continued at the university until his retirement. Both brothers continued working on the dictionary until their deaths, Wilhelm in 1859 and Jacob in 1863. 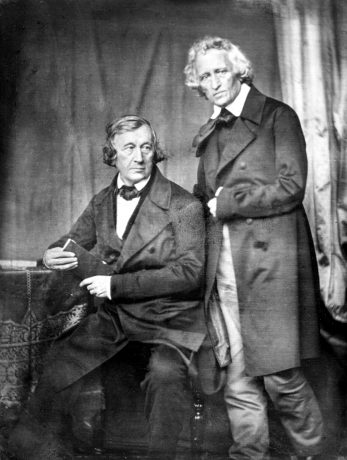 Kassel is a perfect location for the museum as it was the center of their major activities, such as where they began collecting fairy tales. It should also be noted that Kassel hosts documenta every five years and attracts millions of visitors worldwide. The museum is located in the Weinberg area, near the city center, and surrounded by a beautiful view of the southern side of the city.

The museum stands on top of a slope as its natural continuation. Before the museum, there was the so-called Henschel Haus (an industrial building of the Henschel company that made transportation equipment) which was destroyed by an air raid in 1945. The stairway and the wellhead serve as reminders of that building. In the garden there are still some stone relics as a reminder of the history of the grounds. 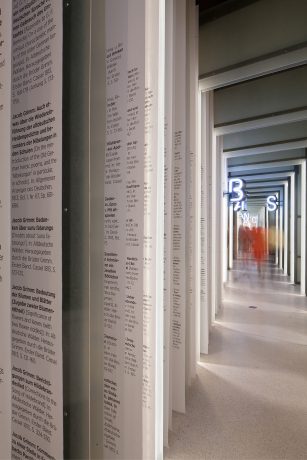 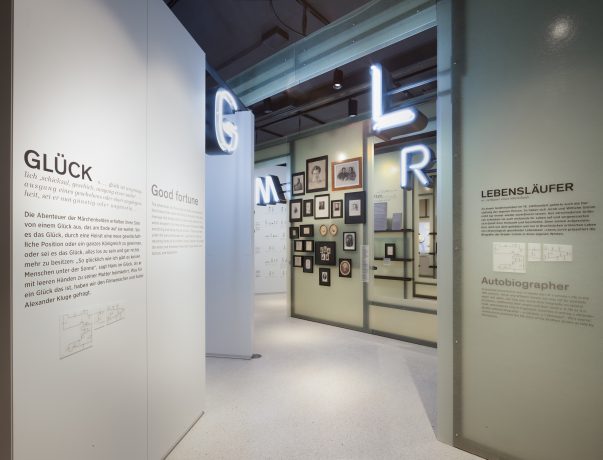 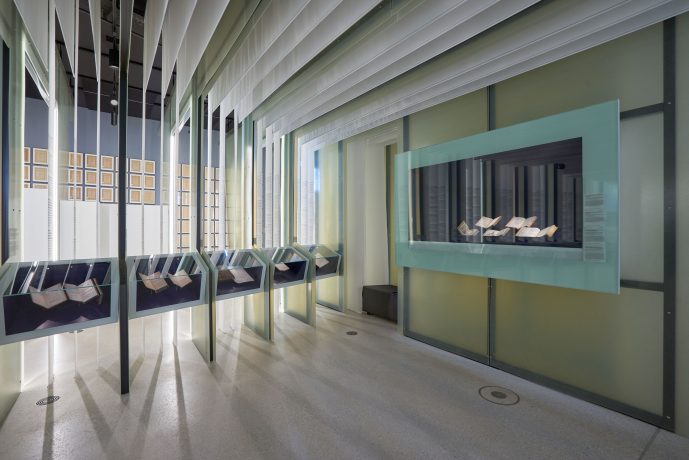 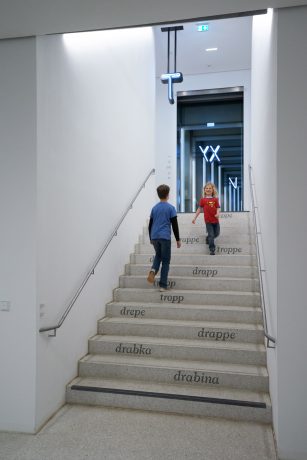 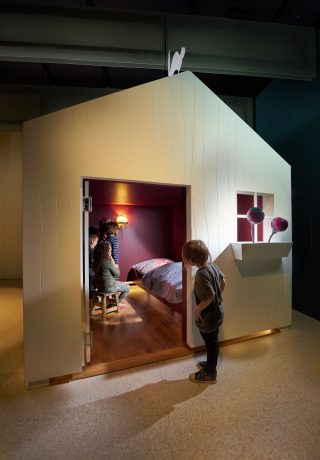 The building was designed by Kadawittfeld Architektur. Its outside is simple and covered with limestone meant to connect it with the past because limestone was found under the hill. It was later used for beer storage in the 19th century and a shelter during World War II. Even though it’s a thick building, the light colored stone gives a natural look that blends with its surroundings. The height differences of the building’s roof give a playful note to the heaviness of the construction. The southern side is embedded with a stairway that leads to the roof that offers a magnificent view of the city. On the roof, there is a glass box that reflects the view and is used as a lift to connect the museum with the roof internally. A variety of events take place there often. 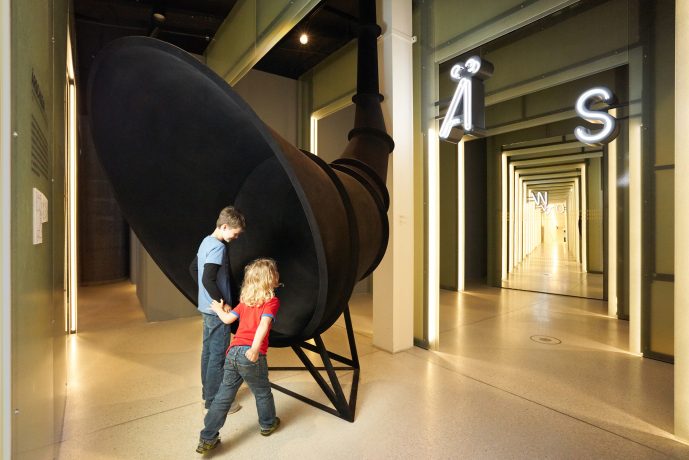 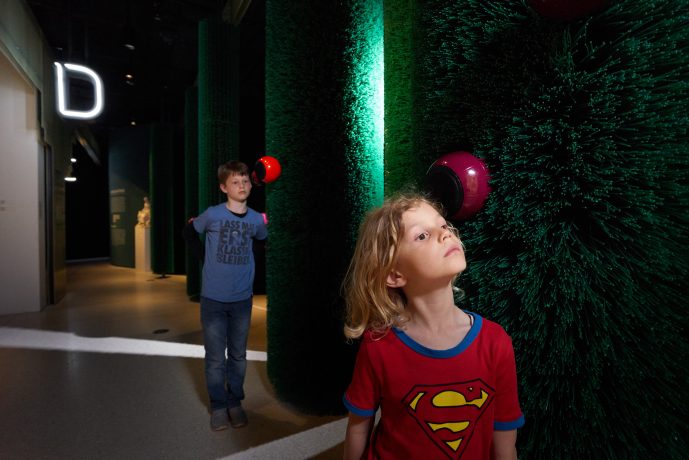 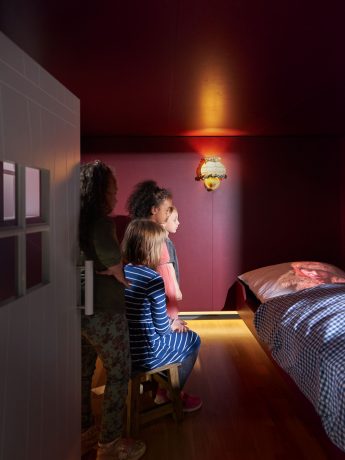 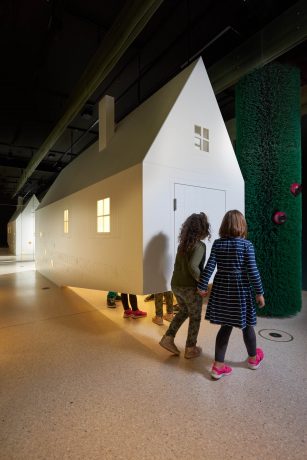 The interior is simple, clear and minimal. Oak paneling is visible in the foyer and the café as a reference to the theme of the forest in the Grimms’ fairy tales. This element gives angles to the ceiling. Glass is also used in the entrance and in the café for panoramic windows featuring a view of Karlsaue Park. The exhibition areas can be found in the levels 1 and 2. The themes are organized by individual letters that analyze a term for the Brothers Grimm dictionary. It’s not a dry exhibition though. Each theme tells a story in an interactive way and emphasizes the Grimms’ work on linguistics and lexicography without forgetting the fairy tale aspect – there is always a Big Bad Wolf waiting for you!

Grimmwelt is undoubtedly a respectful and fun homage to the life and work of the Brothers Grimm. Visitors feel enchanted at the first glance and then become immersed in the fairy tales that we all love! 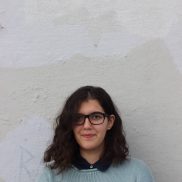 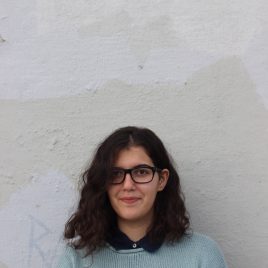 Born and raised in Athens, Lina filled her weekends with museum visits or wanderings around archaeological spaces. During her studies in Cultural Management, Lina collaborated with various cultural organizations and has since become a Communication Advisor and assistant in production.… Read more 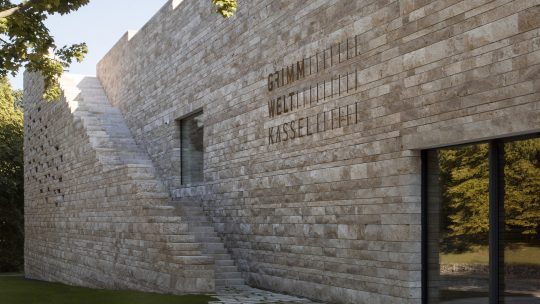