Practice your favourite yoga asanas in these museums around Europe – Museeum

a Prominent European museum yoga venue is The Royal Museums of Fine Arts of Belgium, where the second yoga season is drawing to a close with the third one already planned. The classes are held twice a month on Fridays, up to 25 people can participate at a time and the classes have always been packed. When the museum launched the course in March 2015, 8 classes sold out in less than 48 hours!

“In February 2015, a new RMFAB art space – “Gao Xingjian. The Awakening of Consciousness” – was inaugurated. Gao’s art is all about starting a spiritual journey, about crossing a bridge between West and East. The 6 large canvases take over the entire room and once entered, it allows your subconscious to engage in more than just aesthetic contemplation. The link with yoga to fully benefit from this contemplative space was quickly made. It also reasserts the role of a Museum as a space for reflection. Art incites us to dream and relax and thus “awake our consciousness”. We think that yoga is only one of the innovative ways to remind us that museums have historically always been gathering places for creation and innovation. Culture brings forth tolerance and altruism. Basic values that go hand in hand with yoga and meditation principles”. – Gladys Vercammen-Grandjean, The Royal Museums of Fine Arts of Belgium communications and educational services assistant.

The Royal Museums of Fine Arts of Belgium has been working with Laia for 2 seasons now. We interviewed the guru to find out about her experience teaching in the museum.

First of all the exhibition in which we do the sessions is called “The awakening of consciousness” that really helps to be awakened. The experience is fresh because each session the group is different, new, so there is no build up in this sense. I would say that yoga in the museum is more relaxing, or calm, less gymnastic; but this is also due to the paints of Gao Xing-Jian. We use things and ideas that I acquire from paintings; so I always try to extract an idea and choose special positions to built the energy from art.

Did your perception of museums change when you started teaching yoga in the Royal Museum of Fine Arts?

Mmm... perhaps. I see now how much Yoga-spirituality and arts can be related and interact.

Another European museum yoga hot spot is Italy, where yoga is very popular, so it was a matter of time for Italian Museums to begin teaching yoga classes. One of the uniquely Italian ways to practice yoga is to visit ancient abbeys and manors that offer Yoga Tours. It was introduced by Italian National Trust (Fondo Ambiente Italiano – FAI) a non-profit set up in 1975 in order to save, restore and open to the public numerous fine examples of Italy's artistic and natural heritage.

Having the opportunity to practice yoga in such locations gives a holistic experience of “well being” because you match relaxation and art. You are filled with beauty of you and with beauty of culture.

Yoga tours were launched at the end of September 2015. The first retreat was in Castello della Manta in Cuneo. Now FAI hosts 8 classes in the most beautiful locations. The tour includes a morning yoga class, a walking tour, and a workshop with a renowned yoga trainer a guest star and the director discussing the concept of well being. It wouldn’t have been Italy if in the end there were no snacks, so visitors enjoy a light lunch to recover together and discuss the experience.

Yoga can be also practiced in Italian city museums. We talked to two Italian gurus Kristina Reutskaya in Rome and Anna Borsyakova in Cremona about yoga in Italian museums and their experiences teaching and meditating in art spaces.

Kristina, how did yoga in Italian Museums begin?

Italian “museum yoga” history began in Rome in 2013, when following MoMA and Museu Nacional d'Art de Catalunya in Barcelona, National Museum of the 21st Century Arts MAXXI opened its doors to the discipline. The event lasted for 4 days, with a renowned guru teaching a new style every day. For me personally, it was a very inspiring experience. As opposed to classical yoga festivals, where everyone get a little too “serious”, such Doors Open walk-in yoga days attract various audiences and make yoga accessible to everyone. The first year 100 people participated in the MAXXI event and last year the number has doubled! Of course, the minimalist design and an abundance of natural light in the MAXXI sets for meditative mood. 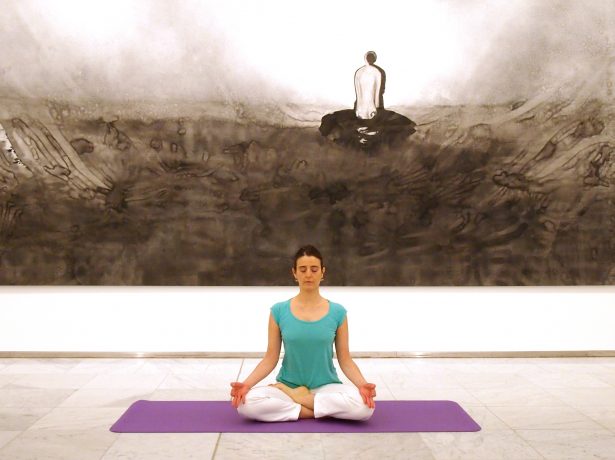 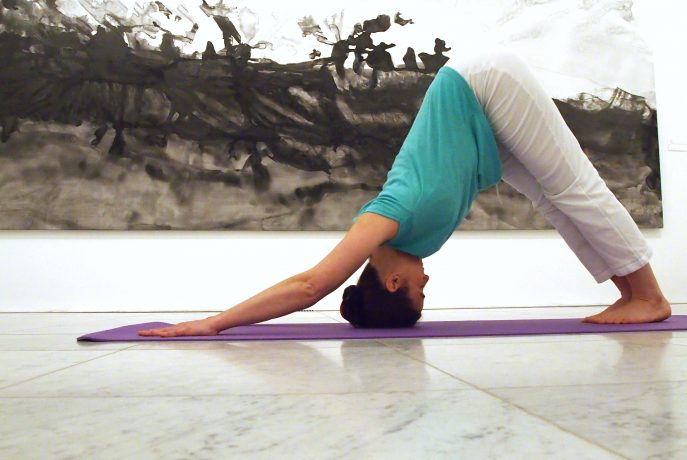 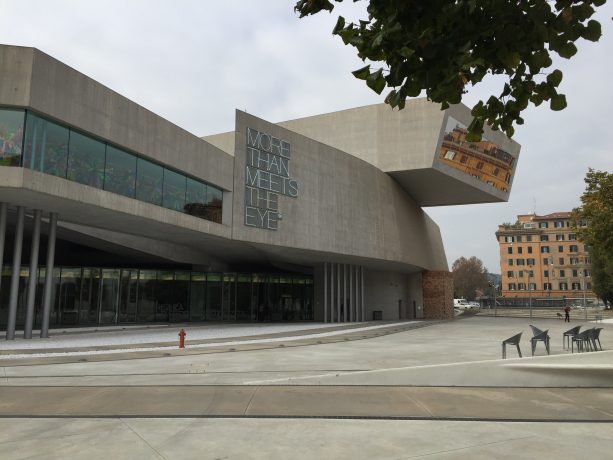 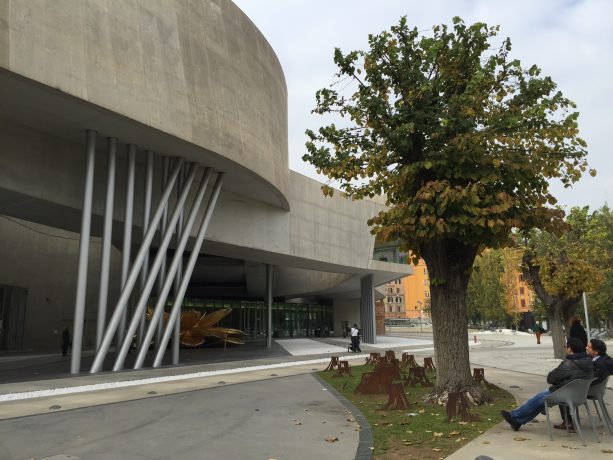 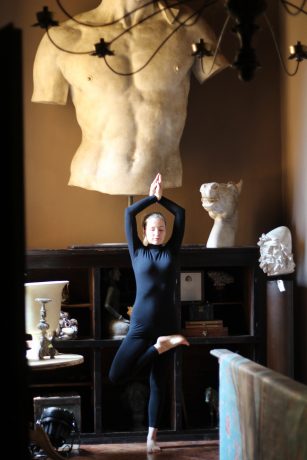 MAXXI is a museum of 21st century art, but what about yoga in classical Italian museums? Should it have its place there?

Translated from Sanskrit yoga means “unity”. Practicing yoga, we learn to feel not only the interaction between our body, mind and spirit, but also to sense the subtle connection of external and internal world. Isn’t it the essence of art? Undoubtedly, historic sites are charged with very special energy and aesthetics that can turn a routine lesson into an Experience. I teach Kundalini Yoga, which often includes meditation and the singing of mantras. Being surrounded by ancient columns you get a more “mystical” effect, and many students like it.

Talking about your teaching experience – would you teach a yoga class in a Roman museum?

Rome is an open-air museum! Outdoors yoga classes are becoming increasingly popular in recent years. Main sites include Villa Borghese in the historic center, and less touristy – Villa Ada and Villa Pamphili (where annual Roman yoga festival takes place). As for the museums, it is not a very common practice, but yoga is gaining momentum in private galleries and exhibition spaces. Take for example a gallery located near the Vatican – MAXXI, its walls are a part of a secret medieval tunnel that was built for Popes to escape in case of an attack. Along with photographic and art exhibitions they host yoga sessions and meditations. To my great joy the popularity of yoga is on the rise. There are many yoga styles, people practicing it are pursuing different aims. Some see yoga as a tool to be fit and flexible, some try it since its fashionable and for others it becomes a lifestyle. Various spaces for yoga practices reflect these factors and in my opinion the boundaries of a standard studio should and must be expanded.

"The philosophy of yoga is being increasingly frequently used in modern culture: from healthy lifestyle to fashion and art trends," - Kristina Reutskaya.

What was the most unexpected space in your yoga practice?

A couple of years ago I climbed to the top of Mount Etna in Sicily together with my yogi friends. Tired and overwhelmed by the extraterrestrial surrounding, we decided to practice yoga before the decent. An energy boost like that was experienced only during severe retreats in India.

Anna Borsyakova teaches yoga in Cremona, a beautiful city near Milan. This September she is beginning her yoga course in a private art space Vita Privata Home Gallery.

How will you prepare for your classes in an art space? Will it differ from your usual class?

Home Gallery is a private art space where the owner hosts a variety of events from exhibitions, concerts, culinary evenings to astrological sessions and taro school, now she adds yoga classes. My class in the gallery will differ from a usual one, it will be a more meditative, aimed at relaxation, we will work with sound and mantras. I will include a gong, Tibetan singing bowls and a harp. Add tea ceremony (it is also a meditation of its kind, that allows you to observe the space and really feel the effect of the practice). Additionally we plan vegan dinners with express culinary courses. 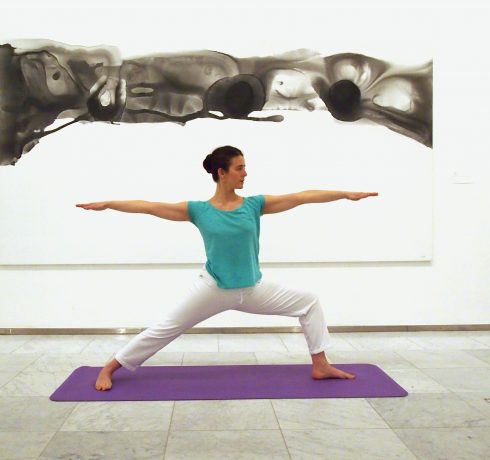 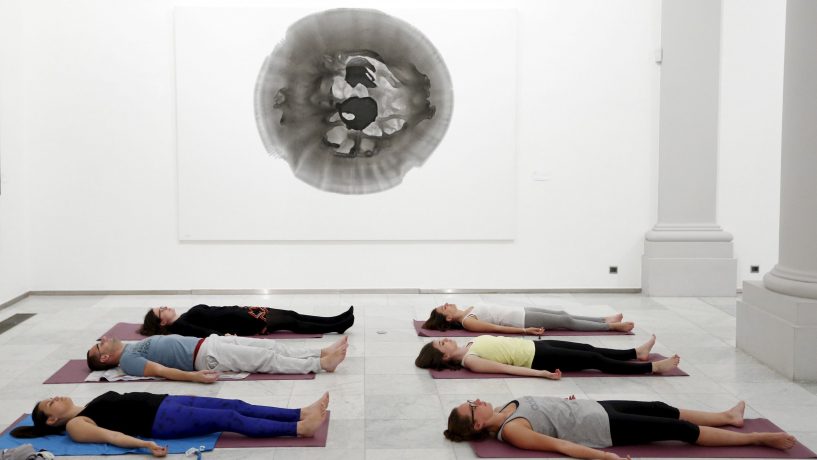 ©Royal Museums of Fine Arts of Belgium
2 of 5 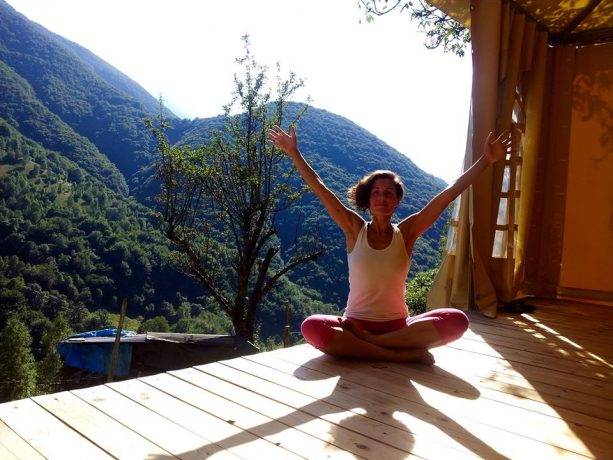 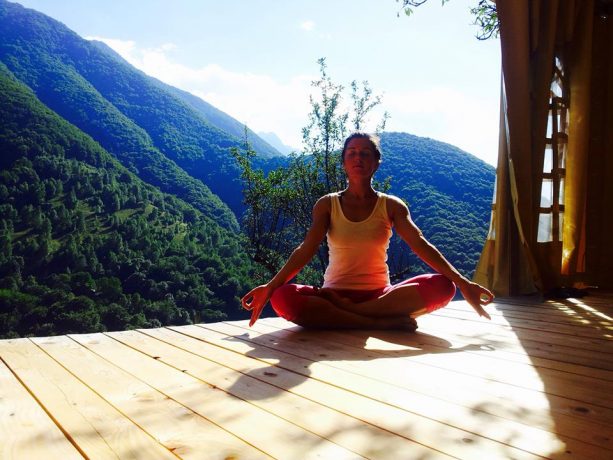 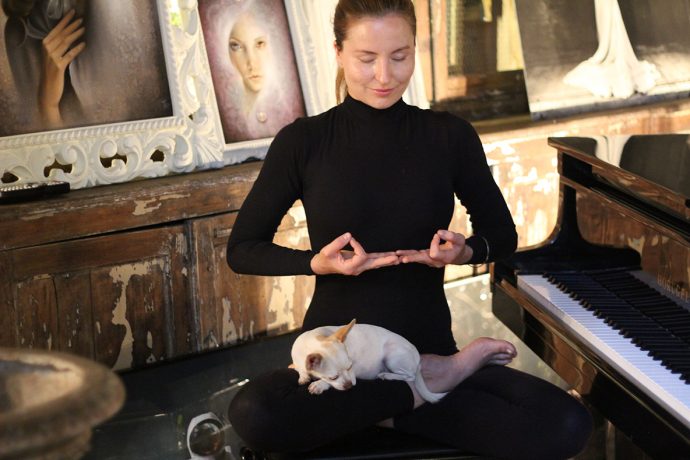 The idea of a yoga practice, tea ceremony and meditation in an art space showcases the adaptability of the practice. You can yoga anywhere! Which space would you say was the most unexpected one to practice yoga?

Under the 300-year-old tree “Nonna Quercia” and an ambulance I suppose. I was very much pregnant and woke up at night because I could not breathe. Yoga breathing exercises and mantras helped me stay focused and relaxed, I was doing them while the doctors were trying deciding what to do with me. Everything ended well, in a couple days I happily gave birth.

Yoga helps us helps relax in our hectic, loud and rushing world. In essence that is what museums do, they can be a hideout, where you speak in an undertone, move gracefully and stand still. So it seems yoga has been in the museums’ air all the way! And it is so natural to practice the philosophy that inspires and transforms in spaces that were created to inspire and transform. MuSEEum will continue exploring and experiencing yoga in museums around the world to bring you Top Museum Yoga destinations.

The Royal Museums of Fine Arts of Belgium Brussels, Belgium