Sue Ryder – who is she? What has she done to deserve her own museum? Why is it Warsaw, Poland? We came across this interesting historical figure while researching museums in Warsaw. Her museum is fairly new and it was named „the smallest one” in the city. Starting with the museum, we researched to find out more about this intriguing Lady Ryder.

It all began in 1923 when Sue Ryder was born in Scarcroft, Yorkshire, England. Her parents were rather wealthy, though from her early years she not only saw poverty, as her house stood beside the slums, but also observed her parents constantly helping the less fortunate. Her home was always open for everyone. Sue and her siblings were playing with the kids from their neighborhood without any prejudice or division. Her mother's approach especially shaped and prepared Sue for her future, grown-up life. Sue inherited the frank interest in other people’s needs, no matter where they came from. She always accompanied her mother with her volunteer work and worked at the family farm. Sue was a girl of many interests, but was mostly focused on what was the most important issue in her life: the feeling of community, which is so necessary to make life worth living.

She was only sixteen when the Second World War broke out. At first, she just joined as a volunteer at the local hospital; however, she hated the passivity and always felt the urge to do something more to help. Her young age and lack of life experience didn’t stop her from volunteering with the army service for women, First Aid Nursing Yeomanry. Soon after, she was accompanied by her two close friends and moved to the Polish section of Special Operations Leadership. After signing the act of a state secret, the three young girls entered a completely new world. The old one was to never return.

Her main duty was to take care of Cichociemni – the representatives of the underground forces fighting with Nazis. Their missions were always at the highest risk and many of them never came back to their headquarters. During her service, she met around three hundred underground soldiers. Each meeting she named „the good-bye.” As a young girl, she said „good-bye” three hundred times, though each time she was filled with an exceptional feeling of unique friendship, loyalty and courage. It was the first time when Sue Ryder thought that, when the war was finally over, they all deserved a monument – live monument, which meant carrying on her mission to help others.

Sue didn’t stop helping people when the war was over. Right after the great terror, she organized humanitarian relief for Poland, primarily for the former prisoners of the Nazi camps. She was also involved in rescuing people condemned to death in the Allies’ prisons.

Between the years of 1951-1952, Sue Ryder's work in hospitals and prisons across Europe. Her work grew so quickly that she decided to create the Sue Ryder Foundation in England. The Foundation's headquarter was located in her mother’s house in Cavendish and its first donors were her mother and friends. Thanks to her mother’s opinion and notable charity work, the Foundation was soon well-known throughout all of Great Britain; thanks to her great co-workers, the Foundation was able to spread it wings and started operating internationally.

In 1959, she got married to Leonard Cheshire, a brave pilot who was responsible for destroying the Gestapo's headquarters in Munich. When they first met in 1955, he was already running his own charity foundation helping ill people all over the world – that was his mission after the war. Having common ideals, values and goals made their relationship a very strong one.

Sue Ryder had a great collection of souvenirs and gifts given to her by people supported by her Foundation. Each one is a specific symbol of the great help she gave to so many other people. At first, Ryder decided to open a little museum in Cavendish to, in a way, give a testimony and acknowledgements to these special donors. Among those usually modest presents were images of the Blessed Virgin Mary and Saint Frances made from grains and wheatears given by the Polish minister of culture, a rug weaved by a Russian who was in Leningrad during a very severe siege, a crystal vase presented by the cancer survivors from one of the Foundation Houses, and a beautifully-made model of a 15th century galleon, which was created by a young invalid and offered to Sue during the celebration of granting her the honorary citizenship of Kotara. The collection is a very diverse one and quite reminiscent of Ryder’s diverse charitable activities.

After Ryder’s death in 2000, her heirs gave all these exhibits and her personal souvenirs to the Polish Foundation of Sue Ryder. In 2010, the city of Warsaw kindly lent to the Foundation a building of Rogatka Mokotowska in order to house the new museum. It is a very special place, close to Lazienki Royal Park, in the center of the city. Rogatki, as these little buildings are called, are located at Unia Lubelska Square and their origin is also a very interesting matter. The history of each of them reaches back to the 18th century; they were built at the main roads leading up to the city, which at that time was surrounded by the thick walls to protect it from the plague epidemic. They served as a kind of station or a check-point. The neglected buildings needed to be renovated which was possible thanks to the support of donors. The Sue Ryder Museum was officially opened on October 19th, 2016.

The museum, which is free for everyone, is tiny compared to some of the museums we visited, but its atmosphere is unique. The big heart of a woman who had one mission through all her life: help others, is locked in every single object on the display. You should stop there and experience the part of that exceptional „live monument” young Sue promised to found many years ago! 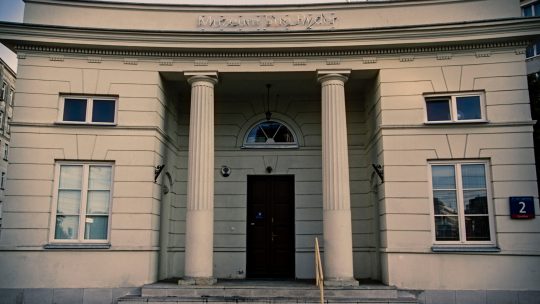