Renaissance is universally considered to be a bridge between ancient and modern history, a revolutionary cultural movement that redefined Western civilization. Today the only place, where you can personally be part of the community that for the last 30 years has been unconventionally affecting our world the way Renaissance did, is Burning Man in Nevada’s Black Rock Desert. So there is good reason why this year Burning Man’s art theme is Da Vinci's Workshop.

Burning Man is dedicated to art and community; it takes its name from its culmination, the symbolic burning of a large wooden effigy (“the Man”) that traditionally occurs on the last evening of the event.

70 000 participants annually unite in a self-governed temporary metropolis influenced by 10 main principles, including:

(1) radical inclusion (everyone is welcome),

(2) self-reliance (participants are responsible for their own subsistence and must bring their own supplies),

(3) self-expression (all can express themselves through art),

(4) gifting (there are no financial relations, no way to buy or sell anything, so participants rely on a gift economy and unconditional sharing),

(5) leaving no trace (respecting the environment)

Burning Man 2016 takes place August 28 – September 5 and while preparations are on the way, we talked to Marian Goodell – Founding Board Member and CEO, Burning Man Project.

This year the art theme is Da Vinci's Workshop and art has always been in the core of Burning Man. What artworks did you love the most in the past and what are you looking forward to this year?

There were so many inspiring artworks, but I must say the one that instantly comes to mind is “Temple of Gravity” from our 2003 gathering. I liked the energy on that one. When you went out there, especially at night, it gave an impression of being in the middle of nowhere and with those rocks and chains, where people were lying, sitting and swinging, the Temple actually looked like a hang out from another planet. This year an internationally renowned American sculptor David Best is doing the temple again and I’m looking forward to see what he produces, it is always a highlight.

This year the Man is supposed to turn, it will be a reference to Leonardo da Vinci’s iconic Vitruvian Man. Da Vinci mapped the ratios of the human body to produce the image of a man, his limbs outstretched to span a universal circle. 2016 Man will emulate the symbol of Vitruvian Man. As nearby bell towers toll the hours, we will invite participants to operate an elaborate system of human-powered gears and pulleys that will slowly rotate Burning Man a full 360 degrees on the vertical plane, as if it formed the axle and spokes of an enormous spinning wheel. It is very difficult from the engineer standpoint, so I’m looking forward to see how this will turn out.

All of the artworks are absolutely unique, is that correct that many of them are sold before the event comes to an end? Or maybe they find their way to museums?

Very few of the works are typically sold before we leave, but they are on sale afterwards, so many museums and private collections own Burning Man outdoor sculptures. For example, Nevada Museum of Art has one of our sculptures in front of their building.

Have you ever thought of a Burning Man museum or Sculpture Park?

Actually we did not announce it, but we are working on it. I cannot give away any specific details about what will it be, but I can say that we bought 3500 acres not far from the event sight, so at some point we will turn it into an art park. It will give those, who for some reason cannot visit the event, an understanding of its spirit.

Talking about the spirit, what unites Burning Man participants?

Different people come for different reasons. I would say that being out is an absolutely unique environment, where nothing is bought and sold and people are being remarkably self-expressive.

It is an outdated stigma that if you are wealthy, you are not connected to the “real world”. Some see it as if wealthy ones cannot be easily adapted to Burning Man and this is one of my biggest irritations. There are different types of camps, a few might be somewhat more comfortable than others, but comfort is not at all a determinant of whether someone is actually being affected by Burning Man. And actually it is great to have kids on Burning Man. We feel that it takes society to bring up kids to be adults so we do not exclude children of any age – all human beings are welcome.

"Many people, who participated in the past, say that they had a much more exciting experience, when they brought their kids. Because kids don’t want to sit in one place, they want to learn what’s happening around them, discover all installations and get to know more people".

How did you become a part of Burning Man?

I saw photos in a photography class and I attended the event in 1995, 1996 and I really wanted to help. There was a sense of freedom that was hard to find in any other place back in 1990s. The feeling was sustained, it was not just a moment, it was a prolonged sense of openness that existed the entire time I was there. At that time the event was just Thursday to Monday, so for those few days you really had this constant feeling of curiosity and wonder in a desert that challenged you physically and I knew that that was special, I knew I had to stay. And that’s how the community grew – from the inside. We never brought in outside forces to organize or curate Burning Man. The community creates itself; the work that we did creating an organization came from those, who participated in it. 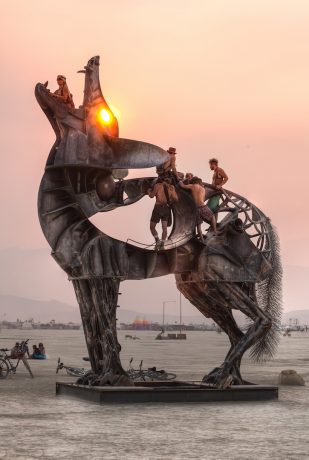 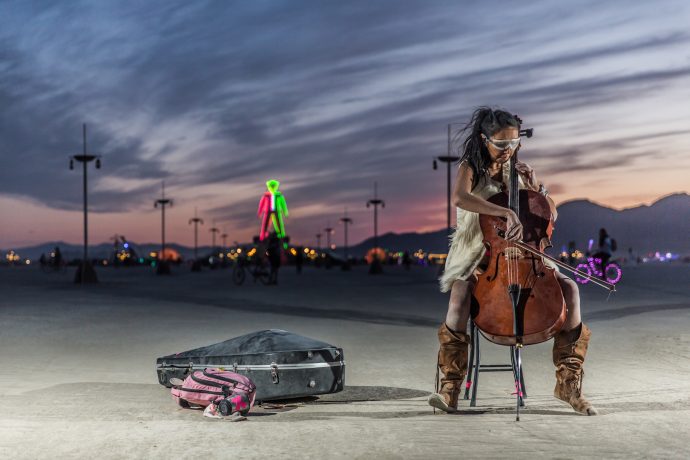 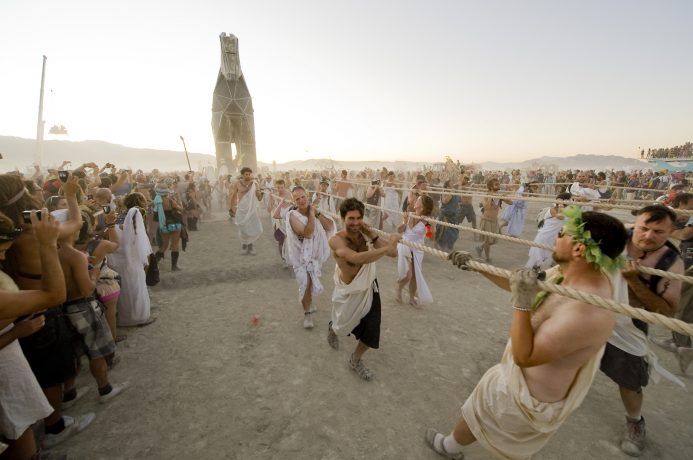 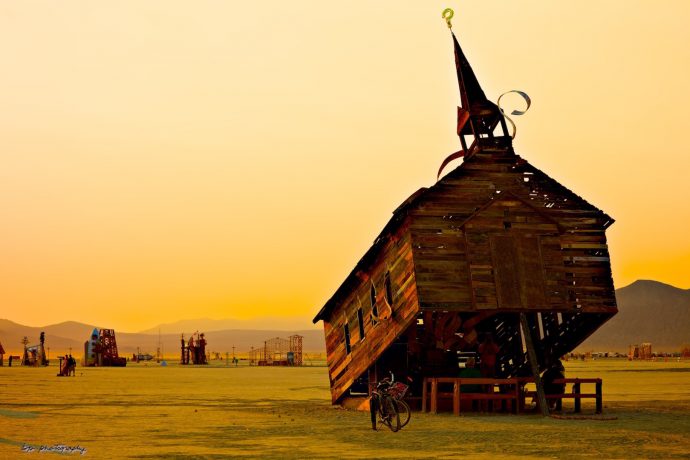 The Church Trap by Rebekah Waites, Photo: Bobby Pin
4 of 10 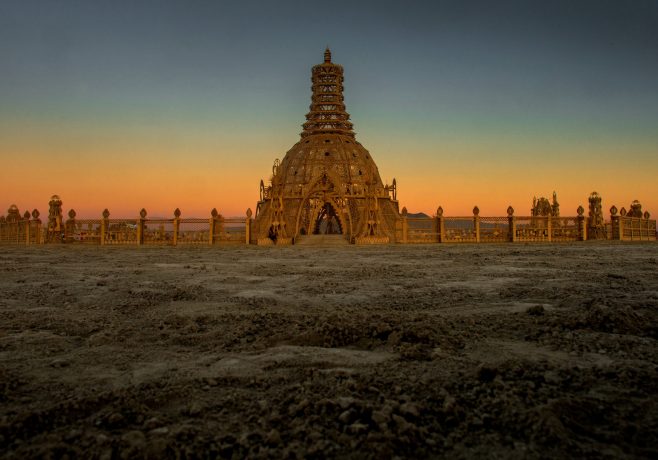 Temple of Grace Sunset by David Best, Photo: Ales aka Dust To Ashes
5 of 10 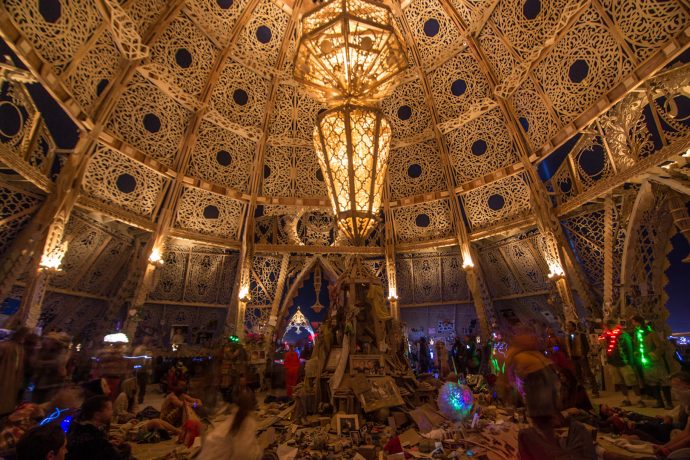 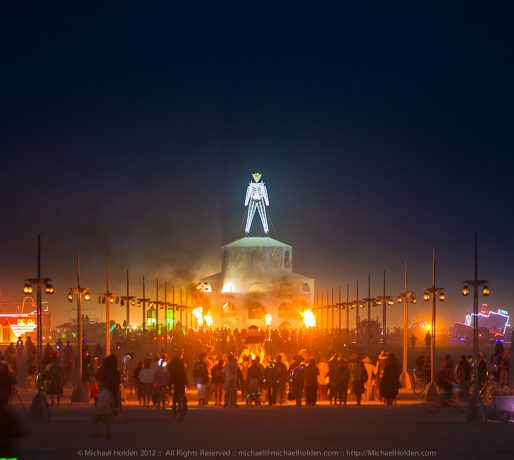 The Luminaria Procession heads up the Promenade just before the burning of the man in 2012. ©Michael Holden
7 of 10 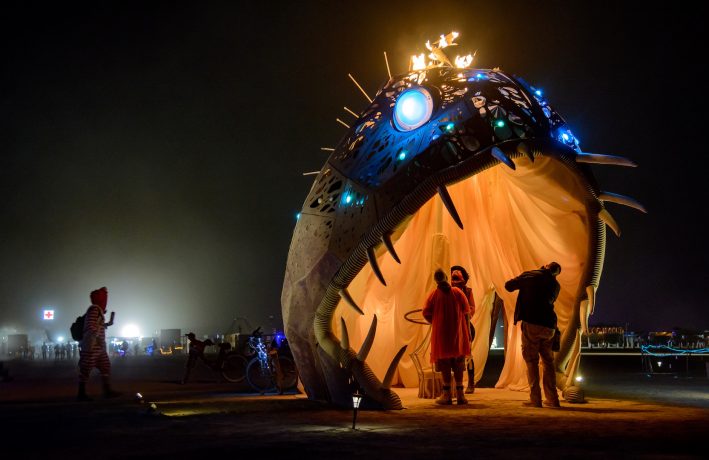 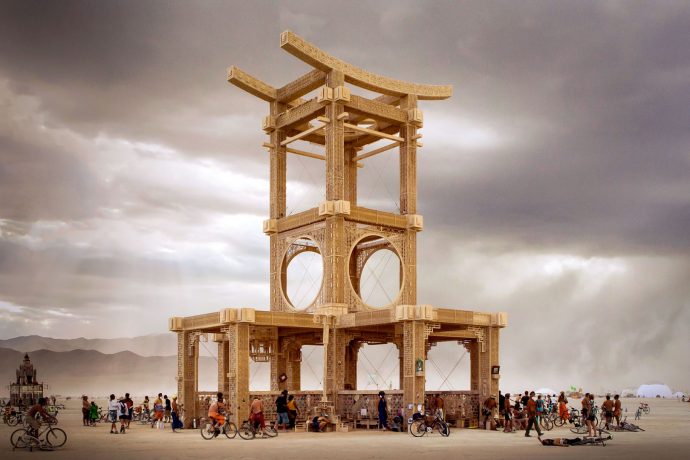 Burning ManThe Temple of Forgiveness at Burning Man 2007. (Photo by Scott London)
9 of 10 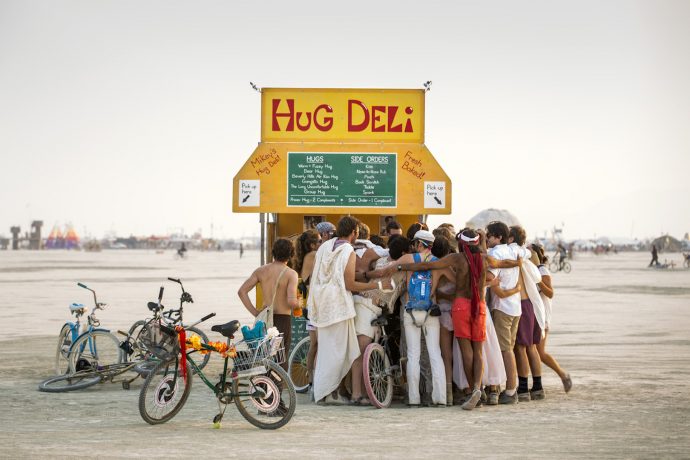 Is there any curatorship or can anyone bring any artwork and display it?

We would never say: “it doesn’t look right” we simply place things. It is an architectural placement process, not curatorial. We curate only pieces we want to spend money on. Each year we offer 1,2 million dollars in art grants to a range of projects. More than 300 artists and art groups sent letters of intent, we accepted about 150-180 letters for board consideration and granted money to more than 70 projects. The grants range from $500 to $50 000. But if you spend your own money on a project, we will not curate it out.

"We look at installations in relation to their size, to weather they burn, to what’s adjacent to them. The desert is huge, so some things can really seem small, but as you get closer they appear to be very big," - Marian Goodell.

Another factor – some artworks make noise, some are quiet. Contemplative things are put further away from the music. So when it has nothing to do with our grants, we are only curating location.

Burning Man is a worldwide community, where are the participants mainly from?

Mainly from the US, but it changed over time, at the beginning the typical visitors were from US, UK, Ireland, Germany and Italy. At least 10 years ago we started seeing big groups from South Korea, Japan and Israel. In recent years it gets really thrilling when some of the old Eastern Block countries are showing up, like Estonia, Latvia, Lithuania. So we are opening up the community to people from all over the world.

MuSEEum hopes that someday our international team will participate in Burning Man and become part of the fantastic community. What stared out as a small function organized by Larry Harvey and a group of friends on Baker Beach in San Francisco, today combines art, maker culture and creative philanthropy to make Burning Man the epicenter of a new renaissance. 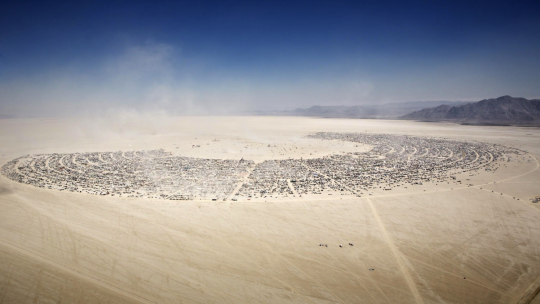